The Energetic Fitness SystemsTM (EFS) technology has been evaluated, and will no doubt continue to be so by several leading researchers investigating it from various scientific perspectives.

Due to the unique characteristics of this technology, most labs are not equipped with sensitive, or sophisticated enough testing equipment to effectively evaluate these units. Energetic Fitness SystemsTM has been very fortunate to have the research support of some forward thinking researchers that have either modified their equipment, found ways to use their existing equipment, even borrowing or renting more sophisticated equipment that has facilitated the analysis process.

In the case of the EFS and/or the EFS user, the field strength reads as a stable straight horizontal line at a distance before dropping off dramatically to 0. These magnetic fields would also expand dramatically during the usage period, with the same results of straight line growth and then dropping to 0.

When measuring these fields for the first time, the test was done indoors in a lab. Within a few minutes the field had extended through to the wall, so the measuring equipment was taken out of the room into the next room, where the field picked up and continued to expand. It should be noted that these are natural fields that all living life-forms have. These natural fields are what have been observed expanding and are not artificially created new ones. In addition the magnetic field transfers from the EFS unit to the EFS “User” when the individual engages with the EFS and that field extends from the user not the EFS unit.

Wallace G. Heath, Ph.D. wrote his preliminary findings of the field changes before and after an energetic charging session on the EFS in his article “Measurements of the increased Human Energy Field Caused by the Energetic Fitness SystemTM “.

Dr. Heath showed that the Human Energy Field (HEF) which expands from the individual is in a direct correlation to the magnetic fields. These frequency fields were measured at various frequencies from 1.0 Hz to 15 Hz and eventually the testing settled on 8Hz.

As with the magnetic fields the frequency field was measured as stable, straight line, and the field that drops from full strength to nothing in a matter of inches. Think of a field that expands from 2 feet to 16 feet in 25 minutes and then onto 18 in the next half hour. This ultimate field strength is stable to 18 feet and then drops to 0 by 18 ½ feet. In addition the field effects, as with the magnetic fields, seem to be accumulative over time.

One individual attempted an energetic exercise used to expand an energy field while being read and the meter showed a corresponding change in the range of frequencies being emitted. No doubt, deeper investigation of these phenomenon’s are warranted. It should also be noted that the frequencies read went as low as 20 Hz. only because that was the limitation of his meter. Since his readings, another researcher has read frequency outputs as low as .01 Hz.

One biologist/researcher, wanting to remain anonymous, was convinced that he would find amperage being generated by the EFS and performed a number of impromptu informal experiments using a volt/ohm meter; firstly, placing the meter probes on the bare skin on the arm of an individual engaged in an energetic charging session on the EFS in attempt to find an amperage reading (this was not a comfortable task for either he or the individual); secondly, he tried to find an amperage reading with the EFS turned on without anyone on the unit by checking with the meter probes over the surface of the glass plate and glass bulb. His meter range went only as low as 10-3 amps. and he did not read any amperage.

Since then, another researcher has attempted the same using a very sensitive amp meter that was capable of reading as low as one hundred thousand’s (10-4) of an amp and still read zero. So far no one has found conclusive evidence of amperage although many other researchers have suspicions that a very low, 10-7, almost undetectable reading may be found with extremely sensitive sophisticated equipment. It is also thought that the theorized amperage may actually be the body’s own bio-energetic amperage.

Using a laser thermometer, the same biologist/researcher read the temperature variations of several EFS users during charging sessions. Running current with amperage through biological systems increases the temperature of individual cells. Unofficially, he concluded that due to absence of changes in body heat from the users that there could be no amperage present or that it was so minute that any thermal readings were virtually non existent.

He also wanted to read the range of frequencies emitted from the unit using a very sensitive ambient frequency meter. He read a narrow band with the unit on and no one on the unit. With the unit on and someone engaged in an energetic charging session, the range was much larger and quite different for each individual, ranging from 20 Hz. to over 3400 Hz (the limits top and bottom of the equipment being used).

“In the history of Science, developing of a new instrument has always resulted in new understanding of Reality. Microscope, telescope, X-rays, camera, laser, computer  “without these instruments the modern science is powerless. Recently a new instrument came to being” a solid state computerized Gas Discharge Visualization (GDV) camera for bio-electrography.

The GDV technique is based on so-called Kirlian effect, named after Semion Kirlian and his wife, who first recorded and studied stimulated electro-photonic images around various objects.

He found, that in order to be able to extract reliable and repeatable information from the recorded electro-photonic glow it was necessary to optimize the apparatus. In particular it was necessary to minimize the influence of the ambient temperature and humidity, use a semiconductor camera rather than a photographic process for recording images and optimize parameters of the process of stimulation of electro-photonic emissions.”

One beautiful, warm July evening, a group of like-minded individuals decided to conduct before and after energetic charging sessions readings using EFS units and a Gaseous Discharge Visualization (GDV) unit to measure changes. It was informal, but the owner of the GDV unit collected the data and shared the results:

GDV IMAGES IN CONJUNCTION WITH THE ENERGETIC FITNESS SYSTEM

Following are some before and after measurements of the effect of the Energetic Fitness System using the Gas Discharge Visualization Camera (GDV) by Korotkov as the testing device.

We did this for fun. There was no attempt to manage the many variables that can influence the Kirlian images taken of the fingertips by the GDV Camera. Yet, it was interesting that 5 out of 6 persons registered statistically significant (~10%) changes as a result of their exposure to the EFS. It is not clear whether these changes are primarily a function of micro-vascular changes in the hands resulting from holding the EFS globe or a more general influence on the entire organism or??

We plan to follow up with more considered experiments.

Four sets of images were captured and computed by software into the following diagrams. The aura presentation accompanies the first 2 diagrams. The methods by which these images and diagrams are created is based on research done by Dr. Korotkov and others and is based on the Su Jok Acupuncture (fingers and toes) system. The technology and theory is a work in progress and will, no doubt, change as our understanding improves. Having said that, the GDV camera is licensed as a medical device in Russia and in active use in countries world-wide.

I, Peter am a 55 yr old male, who was working as an ER triage nurse in a Level II trauma center. The first set of images was taken at 7:12 PM after a busy, nasty day in the ER.

The RED line is this first set of images. The other colors represent the other 3 measurements that you will see later. The “normal” image will approach the “0” concentric circle in the light blue zone. As you can see, the energy signature is quite depleted. 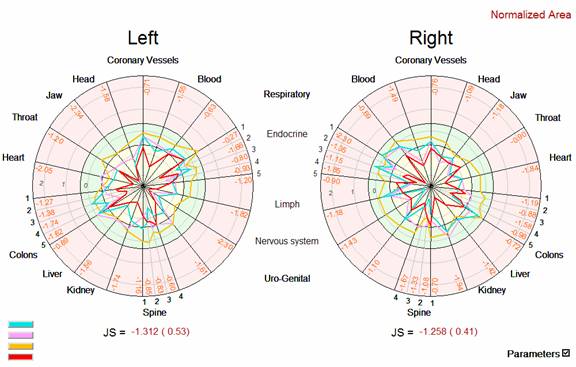 Here is the “aura” presentation of the data following the RED line. Lots of gaps, lack of symmetry, constricted areas etc.:

Here is a comparison diagram at 8:23PM after about 10 minutes on the EFS. I stopped the EFS session earlier than the usual 20 minutes as I felt as “energized” as I wanted to be. Look at the RED line: 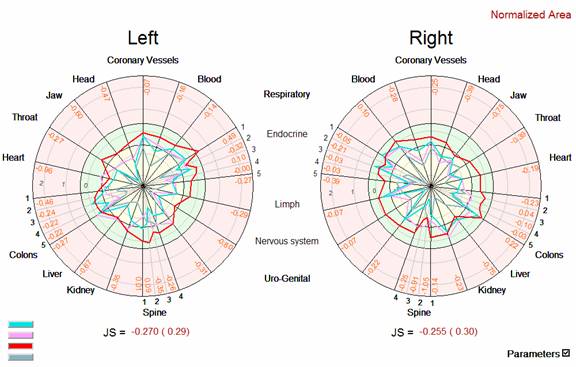 Here is the comparable “aura” diagram:

The next set of images was taken at 10:17pm after dinner. Again, look at the RED line. It has come in some from the yellow line (2nd diagram) but still definitely shows an effect. I also felt better during the 2 hours between the 2nd and 3rd GDV shots relative to how I felt when I arrived: 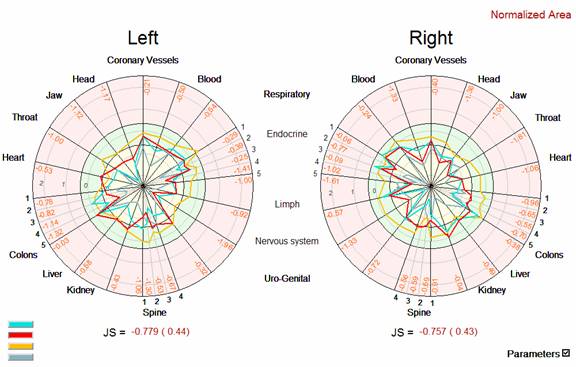 The last shot was at 10:23pm as a confirmation: 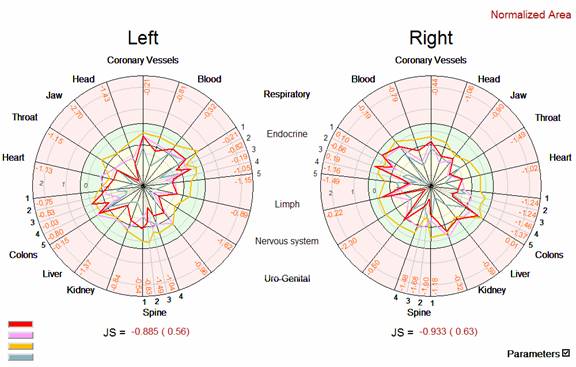 The following contains images generated by the G.D.V. of Shannon, a regular user of the EFS.    Her initial test was done on a day of travel and with only approximately three and a half hours sleep.   The blue lines on the charts and the left full body aura picture diagram the findings from the initial G.D.V. fingertip aura field analysis. 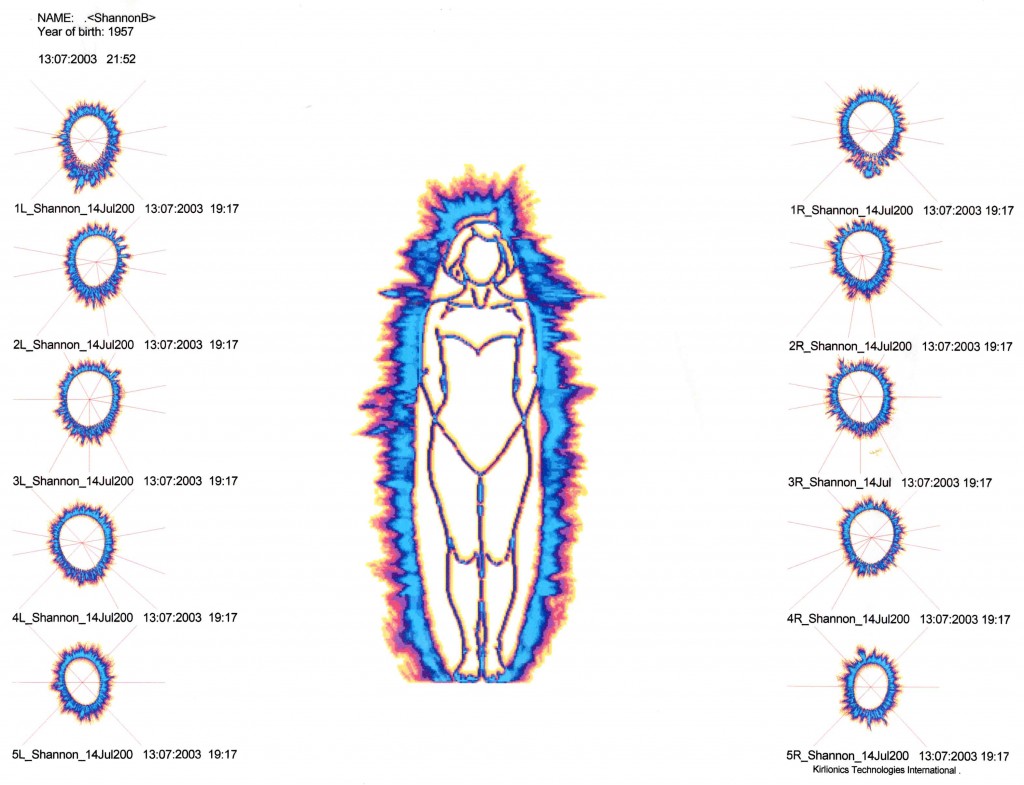 Shannon used the EFS for demonstration purposes that were broken up over an hour.  She then was tested a second time.  The red lines on the charts on page 5 diagram the findings from the second G.D.V. fingertip aura field analysis. 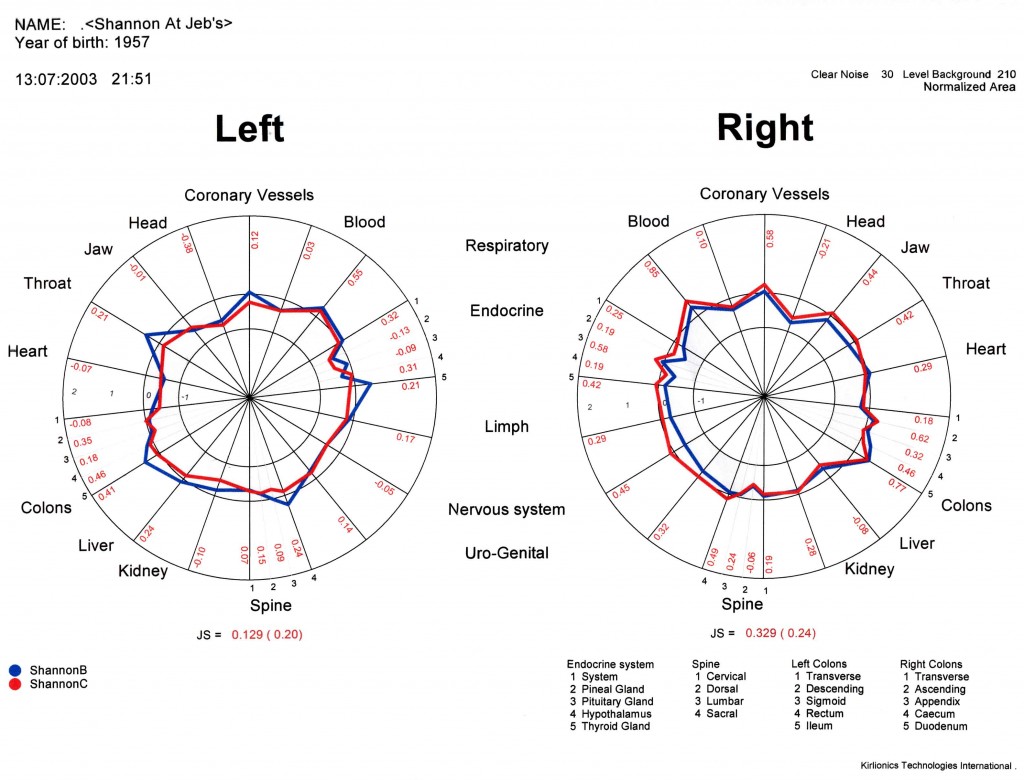 The difference was so minute that no second full body aura picture was generated.  After the EFS Charging Session she reported feeling more vibrant and awake, enjoying the rest of the evening feeling great.

Before and after energetic charging sessions on the EFS, Live Blood Studies (Darkfield Microscopy) revealed changes in blood samples for each user. There have been many individuals tested and each had their own unique before and after results. Common results seemed to be larger brighter coronas surrounding the cells being viewed after an energetic charging session, lethargic white and red blood cells seemed more active and some of the user’s red blood cells seemed to demonstrate Rouleau formation consistent with the 1980 prediction by physicist, Herbert Fröhlich, as discussed in “Energy Medicine: in therapeutics and human performance” by James L. Oschman, Ph.D.

No doubt, deeper investigation into these phenomena is warranted.

Participants of these Live Blood Studies have generously consented to share their very personal images.  Visit us again soon to view more of these remarkable before and after EFS Charging Sessions images.  Please visit often, we will be adding more ongoing.